Available August 15th my first published book! This coffee table art book contains photographs of trucks from the turn of the 20th century to the mid 1970’s, trucks that were found laying in fields and barns. There is lots of great photography, captions and vintage truck ads with the photos. You can check out the link to purchase the book on Amazon

Posted by Michael Harrington at 9:13 AM No comments:

Magazine Profile On Yours Truly! ! ! Part I 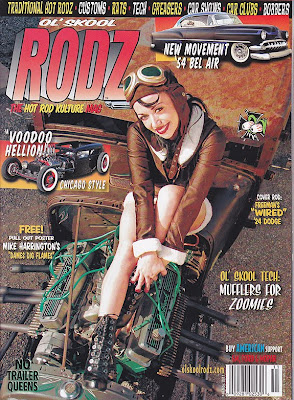 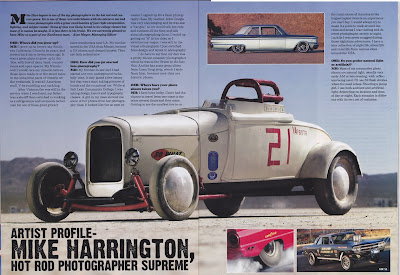 Howdy Folks, This entry will be a little self indulgent (but aren’t all blogs self indulgent anyway?) Old School Rodz magazine runs articles on various artists that work with different mediums. This months, #48 November 2011 issue, they are running a profile on my photography complete with an interview/Q&A session. I’m excited about this one, strangely enough. True I have had many, many, many covers grace magazines over the years, but honestly who pays attention to who shot the cover? Nobody ever reads the small print “Photograph by…” This time it is about me. Kinda cool eh.

When I sent photos in for the spread, naturally they couldn’t run all of them, but in this blog I can include a small amount that the magazine didn’t have space for. In completely random nonsensical order, here are the outtakes in the blog entry below. 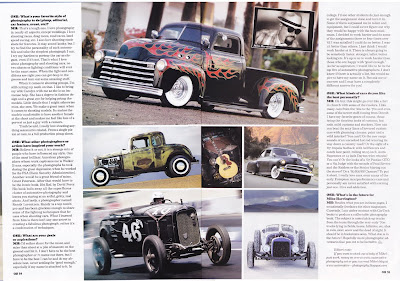 Magazine Profile On Yours Truly! ! ! Part II (out takes)

What is this world coming to?!?!? Since when does the AMA try and dictate to me as a photographer which tools and equipment I am allowed to use? My god, what is wrong with this country? Does the AMA and other bleeding hearts whose rallying cry “Think of the Children” know anything of the history of mankind?

The ancient Mayans used to put their children’s heads between two boards when they were toddlers to elongate their skulls, because they thought it looked beautiful. Certain tribes in Africa have been altering their bodies for millennia because they think it looks beautiful. Ancient Egyptians like Cleopatra wore make up and eyeliner to alter their appearance, because they thought it looked beautiful. Modern women use push up bras, nylon/silk stockings, corsets, wigs, hair dye, lip stick, boob jobs, liposuction, nose jobs and piercings the list goes on and on.

Before Photoshop existed, advertisers used makeup artists, air brush artists and lighting experts to make a women look glamorous. It’s nothing new since the first caveman drew pictures of his girlfriend on the cave wall with big boobies, mankind has always sought to enhance our looks.

How has the Gore family mentality taken hold of this country? Remember tipper Gore and her crusade against the music industry? Now we have warning labels on music. Al Gore and his crusade against the internal combustion engine (while he flies across the country in his private jet and owns a fleet of SUV’s) and now the hypocrisy of the AMA, an organization of doctors that used to endorse tobacco companies now wants to tell me what tools I am allowed to use or not use in my photography. I say to them the words that Jesus once said “physician, heal yourself!”

PS. Am I helping to destroy America's youth by using Photoshop to crop, and adjust light and color in these photos? Let me know.

Posted by Michael Harrington at 11:55 AM 3 comments:

The Blues Magoos are wailing away Tobacco Road as the hi-fi system drowns out the sounds of the shutter. For two seconds between tracks, the world is silent and the shutter can once again be heard snapping and popping like a bowl of Rice Krispies. The Hives explode from the speakers “Here We Go Again”, strategically placed strobe lights are exploding and filling the room with their luminous flux, bleaching the eye sockets of those who dare to stare. All the elements have combined for this moment in the garage, the music, the cool night air, the model, and the resurrected Chevrolet were all deep in the fuzztone groove. An authentic pair of 60’s go-go boots, a real A-line mini dress that somehow survived the last 40 plus years and of course the straight axle Chevelle it’s real Americana on America’s birthday. Happy 4th of July to America! May we as a people trudge through the deep trough of shit we are currently wallowing in and have a future that is as prosperous as our past. One can always hope and dream.