Paranoid In the Nevada desert! 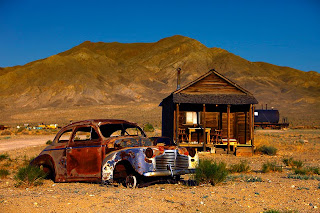 So, Im on my way to Bonneville. Actually, I have already arrived here in Utah, but I have an entertaining story from the road. So my son and I are taking all the scenic byways and county roads from California through Nevada and Utah. While traveling along hwy 266 we stop at a ghost town named Gold Point. Its a fantastically preserved little town with probably four residents still living there.
This is my story of one of them we ran into. We are walking around photographing the sights. We run into a construction worker who temporarily lives there. He tells me of some old trucks about a hundred yards away. So we go to this section of town. Im there for 15 minutes and some haggard looking old man comes wheeling up on his quad. "You're trespassing!" I explain to him what I am doing, taking pictures, and that a construction worker living there told me about old trucks. " I called the Sheriff and he is on his way in from town" I again explain all I am doing is taking pictures of old stuff. Now dig this next bit, you'll get a kick out of his response. "For all I know you could be taking pictures of the place to come and blow it up!" I said " Oh my god, what do you think I am Al-Queda or something?"
At this point I think he realized how stupid he sounded and tried to back pedal on his statement, but was still mean. So we left before he decided to kill us and eat us. Desert people are paranoid. But I did manage to take a few shots before we were run out of town.
Posted by Michael Harrington at 8:32 PM